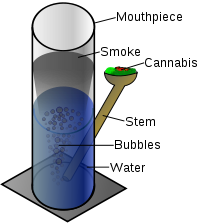 Water pipes also known as bongs a are made in a variety of designs and sizes depending on geographic origin and different traditions. In a bong you will place your preferred smoking blend in a bowl shaped base from which emanates one or more pipes. Smoking with a bong is a different way of smoking because the smoke first goes through water before entering into lungs. Lot of bad stuff is that way filtered out of the smoke. Another good thing is that the smoke will be cooled down and to some extent moistened so it will be less harmful for the smokers respiratory system.

Although bongs are known in Europe since the time of Ottoman Turks under the Turkish name “ Narquile” its origins are much older. Bongs are in fact invented and first used in India, where they have been called Hookah. Bongs are today very popular in countries of the Middle East like Iran, Jordan, Syria etc. People there smoke interesting mixes of tobacco enriched with honey,vanilla, apple or other exotic flavors.

There are many small coffee shops with water pipes available where friends tend to gather and relax. Smoking a water pipe in a group of people is considered as a sign of friendship and trust.

Bongs are great for smoking herbs instead of just tobacco. Pure herb smoke will create cleaner and more satisfying feeling. Smoking tobacco in water pipes will create a different effect. A mix of tobacco and herbs will make you just tired and unsatisfied. You will need to smoke much more to feel satisfied. This effect is coming fro tobacco. Water will filter a lot of the carcinogenic chemicals from the herbal smoke and make the smoke even purer.

In this video, at 7:23, Chadd administers his medicine via a waterpipe (aka bong):

Agriculture Market Forecast: Top Trends That Will Affect Potash and Phosphate in 2023

Can Vaping Cannabis Help You Quit Smoking It?

Proof that Marijuana may cure cancer