The Growing Relationship Between The Solar Energy And Cannabis Industries

You may not know it, but the cannabis industry is one of the most unsustainable industries on a worldwide scale. This fact seems naturally counterintuitive due to the global restrictions and prohibitive laws surrounding its growth and sale. However, these limitations do not stop the demand. And naturally, where there is demand, there is supply – even when contrary to the law.

So, across the world exists a vast number of indoor, outdoor, and mixed cannabis growth warehouses. Despite the varied methods and approaches applied to promote cannabis growth in each of these settings, they all produce harmful emissions.

The majority of suppliers have traditionally opted for high-pressure sodium light sources to keep their crops healthy and harvestable. To be exact, this incredibly intense light source accounts for more than half of indoor cannabis growth electricity. Considered to be around 500 times stronger than a reading light- it can be expensive. And of even more concern to growers in countries where marijuana is yet illegal – it’s noticeable.

But perhaps where this intense, heavy-duty light source is finding most critics recently is among those concerned for the environment. 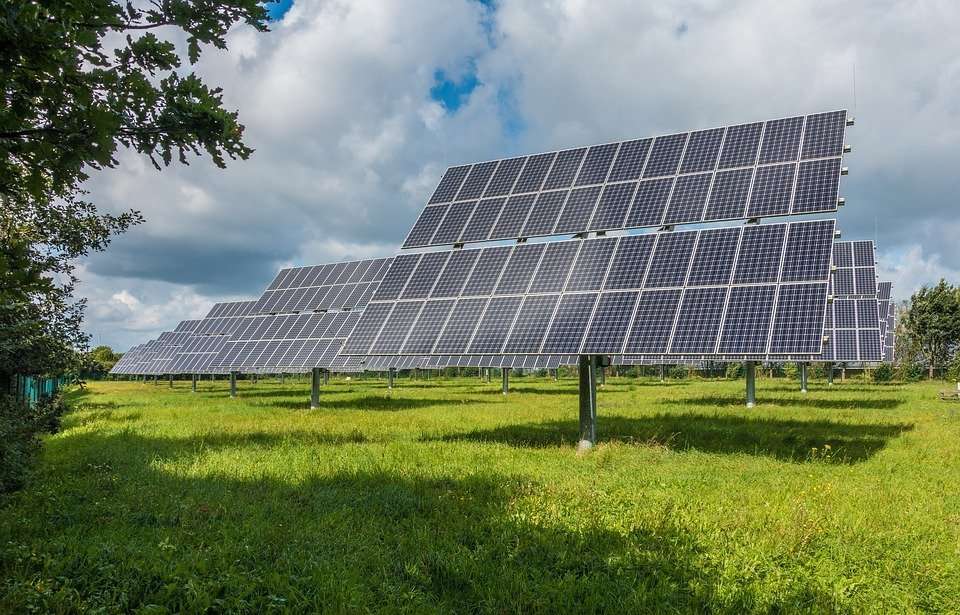 Damaging to the environment

In fact, cannabis growth warehouses across the US have an overall carbon footprint on par with data servers. That’s a lot of power. A 2018 study even warned that the industry’s energy demands could jump by 162 percent by 2022, completely conflicting with the ever-growing public concern for a greener, more eco-friendly world.

The upside of the introduction of solar power

This is where solar power comes into play. Traditionally used by the cannabis industry as an energy source to offset law enforcement, solar energy is slowly coming to the forefront of many suppliers’ business plans. Since solar power doesn’t technically expend any energy while producing energy, it’s completely off-grid. This means that en masse, suppliers were less likely to have their marijuana growth activities betrayed by their electricity bills.

Essentially, cannabis suppliers were being saved by the sun—particularly indoor sellers who predominantly work in built-up areas and cities.

Nonetheless, the shift from traditional power sources to more eco-friendly power sources has been slow, even in countries like Amsterdam, Canada, and Jamaica, where the cultivation, harvesting, and sale of cannabis is entirely legal.

Most marijuana growers relate that they use solar power to a certain extent but not full-scale. This reluctance in prohibited countries is understandable, considering that investment comes with higher risks of financial losses. If a growers’ crops are raided and confiscated, not only are they facing criminal charges, but they’re now forced to contend with any losses accrued by purchasing the often expensive renewable energy sources with no hope of profit.

And in terms of finances, renewable or more energy-efficient options can be a costly investment, especially for large-scale cultivators.

However, as concern for sustainability grows worldwide, some countries and regions have opted for legislation changes in regard to how large cultivators run their growing centers. In 2018, Massachusetts became the first US state to place a limit on the electricity expenditure on marijuana cultivators. The legislation stated that large-scale growers were not to exceed 36 watts per square foot and small growers not to exceed 50 watts.

Only having legalized the growth, sale, and consumption of weed a year prior, this was a swift and sure decision clearly indicating a governmental mindset change. Many other regions worldwide are looking to follow suit as the growth in advocacy for both the legalization of marijuana and the introduction of new eco-friendly measures continues unabated.

Furthermore, there are only a small number of energy sources that can fulfill these measures. As of yet, the standard remains low-powered, energy-efficient LED lights. Though not optimal, these less-demanding energy sources are still favorable in the wider public and environmental advocates’ eyes.

But change is still needed on both an industrial and governmental level in order to take the high-demand growing process towards a more renewable alternative. As of now, most governments are asking growers to actively identify energy use reduction opportunities; consider opportunities for renewable energy generation and develop strategies to reduce electricity demand.

Some countries even have energy efficiency programs in place for growers to avail of, freeing up time and money to focus on optimizing harvests.

The financial turmoil of cannabis legalization alongside use of solar energy

It’s tempting to think this upheaval of well-established, traditional energy grids is unfair on cannabis cultivators as it comes with a slew of fees, charges, and risks. On closer inspection, it becomes clear that governments and legislator bodies are implementing renewable energy requirements for the sake of the environment and the cultivator’s profit.

The trends show that as regulations and laws around the growth and distribution of cannabis are relaxed, sales tend to not only plateau but also sometimes plummet. Therefore, it’s in the state’s best interests to keep the industry afloat by encouraging the move to more cost-effective energy sources.

As it stands now, renewable energy sources such as solar, wind, and hydroelectric are the key to keeping the cannabis industry afloat during the often turbulent legalization process while catering to eco-friendly demands.

Fortunately, the solar energy industry has been experiencing a boom with investors and buyers alike looking to capitalize on the ever-growing tide of environmentally friendly choices.

The future of solar energy and cannabis

So, it seems the cannabis and solar energy industry will be cooperating for the foreseeable future. As cannabis and hemp products are increasingly used in mainstream products, their traditional energy-expenditure will become less acceptable. Moreover, the high retail prices due to high electricity bills won’t exactly be conducive to encouraging sales.

The use of solar energy can fix the cannabis’s industry’s plummeting sales by releasing pressure on their budget so that they can cultivate realistic margins. Not to mention the benefits that eco-conscious business plans can have for a brand/industry image.

As the government’s worldwide look towards the legalization of cannabis, it would be a huge oversight on their part to not incorporate the promotion of solar energy into their plans. The cannabis and solar industry stand to grow in a mutually beneficial partnership if legislation and regulations are crafted mindfully.