Brief History of the Water Bong

A Bong is commonly defined as a device, generally used for smoking cannabis, tobacco, or a myriad of other herbal substances, which uses water and/or ice as a filtration system.

Some suggest that the word “Bong” is said to have derived from a Thai word, “Baung” which means a cylindrical, wooden water pipe. Others say the word may have come from an early water pipe discovery in Africa with the Bong’om tribe. Historically, it is generally accepted that the bong was first brought to the United States by US soldiers stationed overseas in the 1960’s. Since then, artisan glass blowers have made bongs into their own art form. 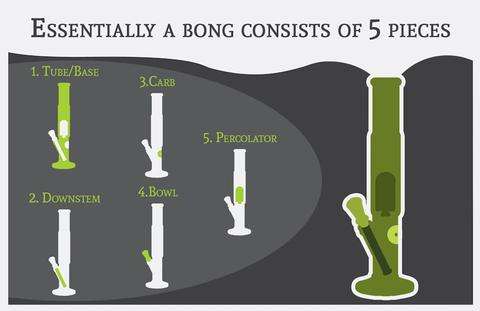 How a Bong Works

The basic concept of the bong is to cool the smoke being inhaled by passing it through one or several chambers filled with water or ice. The more contact the smoke has with the water, the cooler and smoother the smoke. Although these devices vary in size, shape, and complexity,  the one thing they all have in common is delivering a pleasantly refreshing smoking experience.

Essentially a bong consists of 5 pieces:
Many bongs today come with an ice pinch in the tube. These “pinches” in the glass, usually located at a mid-point or near the top of the tube, prevent the ice cubes from falling into the water (at least until they melt small enough to fall through). This additional filter of ice provides another cooling level before reaching the smoker’s mouth.

Why Use a Bong? The Benefits of Percolation

There is no denying the distinctive sound of a bubbling bong, but there is science behind that beloved gurgle. Although the level of filtration acquired is debatable, studies are promising that passing smoke through water helps to filter some of the toxicants that may be inhaled while smoking. With other smaller devices, such pipes, cigarettes, or joints, the smoke is not filtered which allows small particles, toxicants, even burning embers to pass into the smoker’s mouth, esophagus, and lungs, potentially causing damage over time. Using a water pipe, as the smoker inhales, the smoke travels through the water trapping particulate matter, as well as, commingling with clean air and water vapor, which essentially expands the smoke. As more bubbles are created, the more the smoke expands, and the smoother and cooler the hit.
With this in mind, there are many different types of percolation filters found in bongs today which are engineered to provide better air flow and produce a better smoking experience.

These are but a few of the most popular types of percolators: 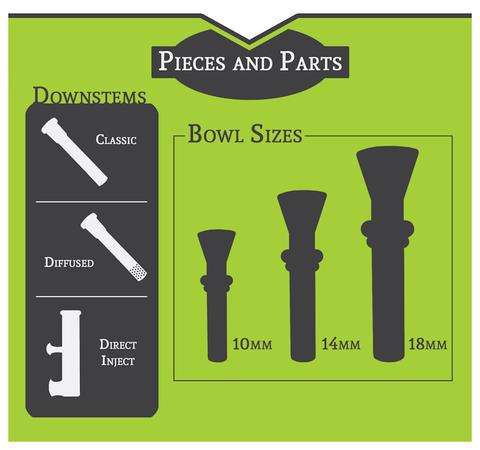 Other Pieces and Parts of a Water Bong

In addition to the percolator, the other parts play an important factor as well. The down stem, example, has three common styles:
Bowls also come in different sizes to fit whatever size stem is being used in the bong. Three sizes for glass on glass bongs are generally considered standard: 10mm (small), 14mm (medium), and a 18mm (large). For water pipes with standard downstems 9mm and 12mm tend to be the most popular size bowls. Even the base of the bong may vary in shape from just a tube, to a flared beaker-style base, or a bubble base.

The Variations are Limitless

So many options, combined with the artistic creativity of extremely talented glassblowers, equals an impressive array of intricate, beautiful glassware seen in water pipes. Some very elaborate pieces may have several chambers with multiple levels of diffusion and functionality, others may be finely detailed sculptures of artistic splendor that sit on a shelf, never used. While some might only be used to entertain guests. Just remember the more complex the piece, the higher the price tag. Bongs can vary in price from very cheap $10 pieces to upwards of $20,000 or more.  Find a good online headshop, like milehighglasspipes.com, when looking for the Weed Pipes, Weed bowls, Marijuana Pipes and bongs.

A bong is considered by many to be one of the most exquisite ways to smoke. From the perspective of improving the overall smoking experience, a bong not only provides the smoothest, coolest hits; it is also a unique and functional piece of artwork.

How long does Marijuana stay in your system?

Does Vape Juice Expire: All You Need To Know